Handbook for children in mobility 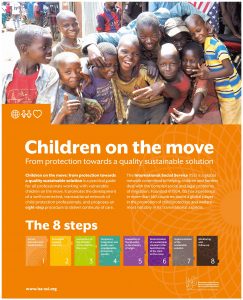 Handbook for children in mobility

The ISS International Network has its manual: Children on the Move-Fro Protection towards a quality sustainable solution.
"This initiative was proposed by ISS Switzerland to the ISS International Council in Melbourne in April 2016 and is the result of the collaboration between the MNA team here who developed the content and the SG who took care of the coordination and some specific aspects.  I would like to thank ISS-WA for its input, contributions and feedback to this important publication for our common ISS Network" said Olivier Geissler, Director of ISS Switzerland.
This Manual, which will also be used to advocate for a better care of children in mobility and young migrants, has been strongly inspired by the RAO practice in the care of vulnerable children.
Like the RAO Standards, it includes eight (8) steps for a quality approach in the transnational care of mobile children and young migrants
It was officially launched at the International Conference on Children Affected by Mobility which took place on 12 and 13 June 2017 in Berlin.

More than 300 representatives of governments, UN agencies, international organisations, NGOs and the private sector from all over the world, as well as several members of the ISS network attended this event which was part of the Initiative for Children's Rights in Global Covenants (www.childrenonthemove.org/fr ).

The conference was intended to create an interactive dynamic among all the efforts made in the field through exchange and to advocate for a strong international strategy for the protection of the rights of children affected by mobility, in view of the Global Covenants of 2018, but also beyond these major events.